JOËLLE DUBOIS paints and illustrates. With a wink she transfers the digital revolution and the resulting role of humans in our modern society into her works. The Gent-born artist is especially interested in the voyeuristic aspect of digitalisation. Social Media Platforms such as Instagram, Snapchat or Youtube, television programs such as Big Brother or the Bachelor fulfill our desire to anonymously observe others in their suffering, their love life, their failures and also th

Using traditional imagery from his own cultural heritage, sometimes mixing it up with the ones from the countries he visits, Mexican street artist, illustrator and graphic designer Saner creates a distinctive vision of the world. His masked characters appear on walls, canvases, paper or found objects revealing the influence of Mexican customs and folklore. With the intense mystery touch and weird sense of humor, his local demons and heroes are relayed to present time. Posing

Lauren YS : Lauren YS is a Los Angeles-based artist whose work is influenced by multiple stages of focus, both geographically and in practice. With dynamic bouts in academics, literature and writing, teaching, illustration, and animation leading up to her arrival in the urban art sphere, the influences of these phases of her own career add up to a robust style of murals and fine art. Lauren's work is influenced by dreams, mythology, death, comics, love, sex, psychedelia, ani 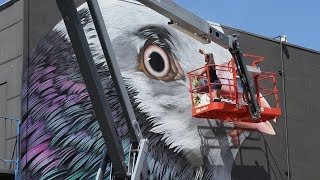 Print by SHOK-1 Available : 'Thorns (Gold)' 2019 76 x 76 cm Silkscreen print 9 layers plus a varnish on Somerset Satin 310gsm paper Signed, numbered and embossed by SHOK-1 British artist SHOK-1 spraypaints unique X-ray art on walls around the world. The works present a kind of diagnosis of life in the 21st century, sometimes in glowing health and other times pathological. A cool blend of street and science, the paintings are enormously popular. Darkly beautiful and pa

'From Here to There' Catalogue

Browse the catalogue from our latest exhibition ' From here to there' . Follow the link ! http://www.arcadeartgallery.shop/category/from-here-to-there 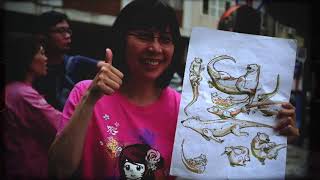